Pro:Idiom – What is Pro idiom and what does it mean for your hotel?

& What Does Pro:Idiom Mean for Your Hotel?

Digital Rights Management & Why We Use Pro:Idiom


Content protection was not an issue for standard definition hotel television systems during the analog era and Pro:Idiom encryption was not needed. As satellite and cable TV providers and hotels have moved to TV systems that provide fully digital, high definition (HD) signal, content providers have required digital rights management to protect their intellectual property, the movies and shows your guests are watching.

Content providers like HBO, SHOWTIME, ABC, and other TV and movie channels are requiring hotels to have an encrypted signal going to the television in their rooms to prevent piracy of the content they produce.


HBO, Showtime, Discovery, Disney, ESPN and other digital television content providers require encryption of the HD signal in FTG Hospitality environments where a set top box is not present in each room in order to protect their content from piracy.

How Does Pro:Idiom Work?

The delivery of Pro:Idiom encrypted HDTV signals requires a TV distribution system that allows a central decoder in a hotel to decrypt video from a high- definition headend or satellite feed and then re-encode it for secure delivery to TV sets in each room that are equipped with the Pro:Idiom chip or to a set-top box for each TV.

What Does Pro:Idiom Mean For Your Hotel

Because of the need for encoding and decoding the digital signal, Hotels will either have to:

What type of Hotel TV System will I need for Pro:Idiom? 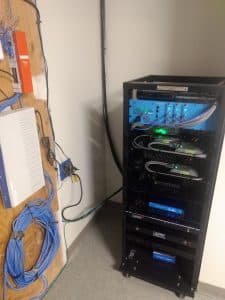 Among headend systems, the COM3000 Pro:Idiom 4K/HD Headend System is the most advanced and most cost effective system available.

The COM3000 adds 4K capability as well as the ability to deliver 138 channels from a single headend (pictured here).

An encrypted hotel television signal requires a TV that can decrypt that signal. LG, Samsung, Panasonic, Sharp, and Philips manufacture hospitality televisions that have an integrated Pro:Idiom chip to make that encrypted signal visible on the TV without the need for converter boxes.

Pro:Idiom is widely used in hospitality environments and is quickly becoming the standard for hospitality televisions with the largest Hotel brands from Choice to Hilton are specifying it as their approved TV type.

The Technicolor COM system which includes the NEW COM3000 HD/4K headend system, and the COM1000 and COM2000 High Definition Headend Systems using the Pro:Idiom Digital Rights Management is installed on more than 2.0 million out of the 5.5 million total screens in the U.S. hospitality industry.

Find out if your hotel is a candidate for a
COM3000 Pro:Idiom 4K/HD Hotel Television System
and Pro:Idiom Hotel TVs

(Pro:Idiom™ is a trademark of the LG Zenith Corp.)