TV for Hotels – The NEW Technicolor COM3000 for DIRECTV

The COM3000 Mediatune for Your Bar or Restaurant 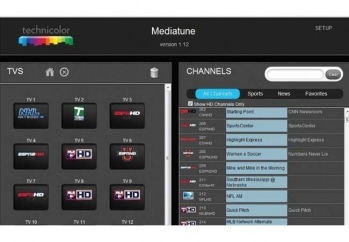 When you call Barry at Its All About Satellites for DIRECTV for your Hotel or Resort, remember to ask about how you can use the COM3000 to control the TVs in your bar or restaurant.

Let’s say you have a bar or restaurant. You’re going to have a lot of televisions and that means you have to make a lot of decisions. Most of the time you’re going to end up with tons and tons of equipment, perhaps enough to fill two floor-to-ceiling equipment racks. That stuff takes power. It generates heat. It takes a lot of wires. You’re going to be thinking, “There’s got to be a better way!”

A compact headend like Technicolor’s COM system is the perfect replacement for expensive AMX or Crestron controllers as a way to supply DIRECTV satellite service to a bar or restaurant or anywhere you multiple TVs.

The COM3000 MediaTune competely solves Bars and Restaurants biggest problem with multiple TVs…changing the channel.  Until now, the only option Sports Bars and Restaurants had for controlling multiple TVs with a single remote device was an extremely expensive matrix switcher with a AMX or Crestron controller. Otherwise you were stuck with a box of remotes, each one for a different receiver.

With the Technicolor COM3000 MediaTune you can:

The Technicolor MediaTune COM3000 headend gives you the flexibility to access it from any web enabled device. In other words a PC, a laptop, an iPad, or even your iPhone or smartphone. It’s so simple to use, drag and drop, that any of your staff can be trained in its use in just a few minutes.

“A fully loaded COM3000 system gives you 138 HD channels in the same size box as the old COM2000 which only gave you 48. The secret are these new tuner cards that take the place of 23 receivers. I don’t know how they get it all working in such a small place, but they do. There aren’t going to be a lot of places that need more than 138 channels, I’ll tell you that. All those channels can exit over a single coax cable or 10Gig Ethernet connection – your choice.”

Find Out if Your Hotel Qualifies for
DIRECTV COM3000 HD Headend