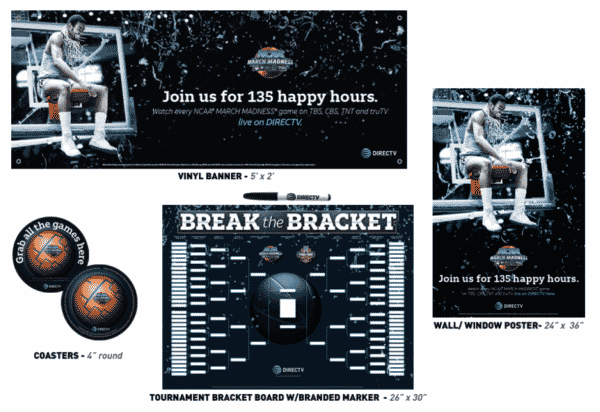 Promotional materials shown may not represent those available for current year

The NCAA Basketball season is approaching the most exciting part for basketball fans AND for bar and restaurant owners  – tournament time! March Madness is Coming.  This article will help you market March Madness!

The 67 games of the NCAA Basketball Tournament make it the #1 viewed event in the U.S. In 2015 March Madness averaged 11.3 million viewers per game on TV!

That’s over 700 million viewers for the 67 game tournament over a 3 week period. More than 100 million people will participate in tournament bracket pools! Any wonder why it’s called March Madness

Where Will Your Customers Go To Watch the Games

Your customers will want a place to go with their friends to experience all 67 of the March Madness games starting March 15th and to watch the Final Four and NCAA National Championship to be decided on April 2nd-4th at NRG Stadium in Houston Texas.

It is sure to be a great opportunity for your Bar and Restaurant to draw in new customers.

Major Conference Tournaments start in early March and the NCAA Basketball Tournament, best known as March Madness, tips off with Selection Sunday on March 13th. With 67 games being broadcast over 3 weeks starting on Tuesday March 15th.

March Madness at Your Bar or Restaurant

According to the National Restaurant Association, 20% of consumers are likely to watch college basketball at restaurants or bars in 2016. Over 125 million people went to a local bar or restaurant to catch March Madness games in 2014.

For bars and restaurants with multiple TVs this may be your best opportunity all year to draw in new customers. Even if your restaurant wouldn’t usually be confused with a sports bar, this is still a golden opportunity to pick up additional business.
• 34% of consumers choose to go to bars or restaurants that offer special deals for the games
• 25% choose the establishment with the best TVs
• 19% choose the place with the best food and drink choices
• 17% go to their favorite restaurant and bar
• 4% go to wherever fans of their favorite team will gather

One in four men said they’d go to a bar to watch at lunch. It’s a fantastic opportunity to get extra people in your door during late March and early April!

Will they be watching it at your bar or restaurant?

It’s critical to make it clear to your current customers early on that your bar or restaurant is committed to the whole March Madness tournament. Start including references to important games and tournament selection in your Facebook and Twitter posts.

Make it clear you’re following the building excitement along with the fans and you’re likely to get more traction as you start dropping mentions of specials you’ll be offering during the games.

Social media is an easy way to have potential customers begin associating your bar or restaurant with a place they can go to watch the tournament.

Since your bar or restaurant probably won’t be adding new flat screen TVs in time for opening tip-off March 17th, you’re stuck with the TV situation you currently have. The key is optimizing the experience for customers.

How to Market March Madness at Your Bar or Restaurant

There are definite ways to take advantage of the hype surrounding the NCAA Basketball tournament. If there is one constant that bar and restaurant owners can take away from March Madness, it’s that people will be flocking to bars and lounges across the country in order to watch the games.

Your business can differentiate itself from your competition and capitalize on this phenomenon by developing a March Madness themed marketing campaign.

Tip #1 – Have a Selection Sunday Party at your Bar or Restaurant.

The start of March Madness is not the first tip-off, its seeing if your favorite team will get in and where it will be seeded in the tournament pools.

Tournament pools are to March Madness what Fantasy Football is to the NFL. Fans closely follow the tournament’s bracket and 100 million will enjoy filling out their own brackets to make predictions on the winners and to compete with other fans.

Increase engagement with your customers by creating daily, online, and full-fledged tournament brackets. This can be one of the most effective ways to reach out to March Madness fans.

Holding a March Madness contest with prizes and specials is a great way to engage fans and customers and grow an audience.

Make sure you have brackets posted prominently in your restaurant. Have your wait staff ask your customers about their brackets and engage them about their favorite teams. Have specials focused on match ups and bracket names – First 4, Sweet Sixteen, Elite 8, Final 4.

If you have a restaurant, consider offering patrons a free appetizer if they still hold winning brackets. This will keep them coming in even after the event is over!

Social media should be used as an integral piece of your March Madness Marketing strategy. With over 50% of fans participating in social media daily, this is a low-budget way to draw in customers.

Picking one team and promoting them throughout the tournament can be an easy way to turn your Bar into a “Team HQ”. Fans will flock to your bar to watch the games with fellow fans.

In larger bars you can separate areas of your bar for multiple teams.

A local or regional team’s participation in the tournament is a great opportunity to market to local fans. Consider tying sales and promotions with the team’s games and offer specials if they win.

Encourage fans to wear team colors or clothing to your events by offering specials related to team apparel and use these colors in your business ads. Target fans in your local advertising and use social media campaigns to generate interest.

Email is still the most cost effective form of advertising for bars and restaurants. With email lists, you can blast out promotional messages daily and update fans on the brackets. You can even automate much of this so that your social media posts are automatically sent out as an email.

March Madness is Your Ticket to Increased Sales

March Madness turns casual sports fans into basketball junkies for a three weeks every year. Everyone you know has a bracket or is cheering for their alma mater or local team. More people watch the NCAA basketball tournament at bars and restaurants than any other event all year. One in four men said they will go to a bar to watch at lunch.

The question is, Will they be watching it at your bar or restaurant?